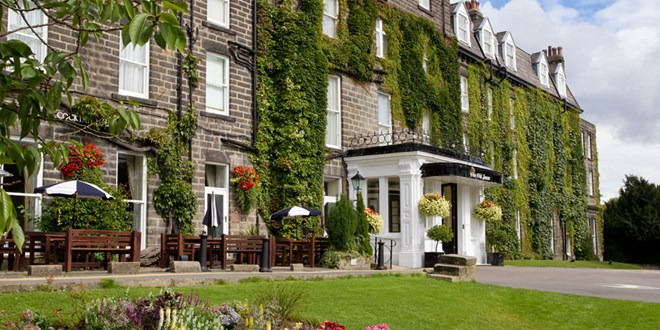 There must be something about the first weekend in October – so often we have been blessed with beautiful autumnal weather and this year was no exception. As everyone started arriving at the hotel on Friday afternoon there were hotel guests enjoying afternoon tea outside in the sunshine and a group of rather exotically dressed people sitting on the lawn drinking wine. The ‘mystery’ of their costumes was revealed later when we discovered they were part of a group enjoying one of the hotel’s famous ‘Murder, Mystery Evenings’. There was certainly no ‘mystery’ about our presence as the joy and delight of people greeting each other after the passage of so much time filled the reception area. 69 people had booked to come to Harrogate and 29 of that number were from the Year of 1965 who were celebrating 50yrs since leaving I M Marsh. Friday evening was spent, over dinner and drinks, reminiscing about those wonderful College years.

The official start of APS Day began on Saturday morning with the meeting and greeting taking place over coffee and tea served with tempting warm croissants and cake. It proved so difficult to prise people away from their coffee and chattering that poor Linda Bond (Ward 1967), who always gives us a few games to help mix up the groups, was left wondering whether she would ever get started!! She had just about managed to sort us into, haddock, bream, flounder, mackerel, sardine, whiting and cod when the announcement that a parking permit was required for those using the hotel car park resulted in several people rushing off to prevent their cars being clamped. True to her training at IMM, Linda chopped and adapted her programme and eventually managed to get us into our groups of ‘fish stew’. In these groups Linda set us several tasks which resulted in us recalling stories from our experiences of our working lives post our IMM years.

It was then time to listen to our speaker for the day, Cathie Sabin. She called her talk ‘A Game for All’. Cathie is the President of the Lawn Tennis Association but she is also one of ‘our own’ having graduated from I.M.Marsh in 1968 (Cathie Piddock). She said she had played tennis from the age of 5 and had always loved any game involving a ‘bat’ and ball. It was a natural progression to study at I M Marsh and she described her time there as ‘the best 3yrs of my life’. It was fascinating to hear of the journey which led to her present post of President of the LTA and of the many different ways that the LTA is trying to foster interest in tennis amongst all age groups and abilities. She said the LTA were anxious to dispel the image of tennis as a ‘white, middle class sport’. The introduction of short tennis’ had revolutionised the way young people were taught and opened up opportunities for the very young, the old and those with disabilities. To find out more visit www.lta.org.uk/tennis-foundation . Everybody wanted to ask Cathie questions and, if time had permitted, we could have spent another hour listening to her. Finally, there was great excitement when Cathie announced that, to finish her talk, we were all going to play a game and the prize for the winner was 2 tickets for the Ladies Final at Wimbledon 2016!! We all wished we had brushed up on our knowledge of facts about the Wimbledon Championships. Ultimately it was Lynn Lovatt (Harris 1965) who came away the winner. I suppose with 29 past students from 1965 being present, the odds were very much in favour of one of their year being the victor!!

After a splendid lunch it was time to hold the AGM. Barbara welcomed everybody and congratulated 1965 for having so many attendees. She was sad to say that she had never had such a long list of deaths to announce and amongst them was our oldest member of the Association, Joyce Cooper. Joyce had been a firm supporter of the Association and an ‘ever present’ at our reunions until ill health intervened. We will all miss her. On the bright side, Barbara was delighted to announce that Marion Percy (Robertson 1950) had been awarded the British Empire Medal in the Queen’s Birthday Honours for her services to the community of Colwall, Malvern, Worcestershire.

The business of the AGM was conducted quickly and efficiently. Kath Simpson (Fahey), our Membership Secretary informed us that the Association currently has 308 full members and 10 Honorary Members and Ex-Staff. Jean Taylor (Sutton) our Treasurer happily reported that finances are in good health and subscriptions were coming in steadily. Sylvia Ellis (Phillips) our Journal Editor hoped that everybody had enjoyed reading the Journal. Because of personal commitments Sylvia warned us that 30th November 2015 would be the absolute deadline date for entries for next year’s Journal so can everyone please ensure that their news is sent to their Set Rep or to Sylvia asap. There were some changes on the Committee – Trish Wootton (1965) and Jean Winstone (1963) were stepping down and Barbara thanked them for their hard work during the time they had served on the Committee. Jean Taylor (Treasurer 1967), Sylvia Ellis (Journal Editor 1964), Ann Walker (Hodkin 1964) and Linda Bond (Ward 1967) had agreed to stand for a further term and were re-elected.

The venue for our next Reunion will be the University of Warwick on Saturday 1st October 2016. Details and booking forms will be in next year’s Journal, normally published late March/early April and will be on our website www.immarshpaststudents.org.uk shortly thereafter.

Finally Barbara presented everyone with a beautifully engraved pen as a memento of the occasion. After Barbara had closed the AGM, coffee and cakes were available and there was more time to chat and take photographs. Many members stayed on in the evening to have dinner at the Old Swan.