It is with regret that we have to inform you of the death of Noelle Roberts (Godfrey). Noelle passed away on 24th December 2016.

She was a stalwart of the Association being an ‘ever present’ at many of the reunions along with Gillian Smallwood and Barbara Abrey who were also 49ers. She was the Set Rep for 1949 and in her annual reports never failed to mention her thanks to the Committee for all their work in organising reunions.

Noelle, Gill, and Barbara (known affectionately as ‘Bobby’) met at I M Marsh and remained close friends for the rest of their lives. In her Set Report for 2012 she writes “We are all growing old ‘disgracefully’ and finding it more and more difficult to move around. We are fortunate that after leaving I M Marsh 63 years ago, the friendships we formed there have not diminished and when we do meet up, the years are shed and our time in Liverpool is remembered with affection”

I think we can all identify with that! 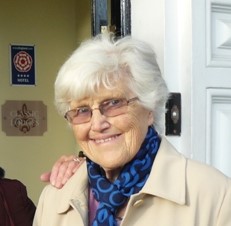